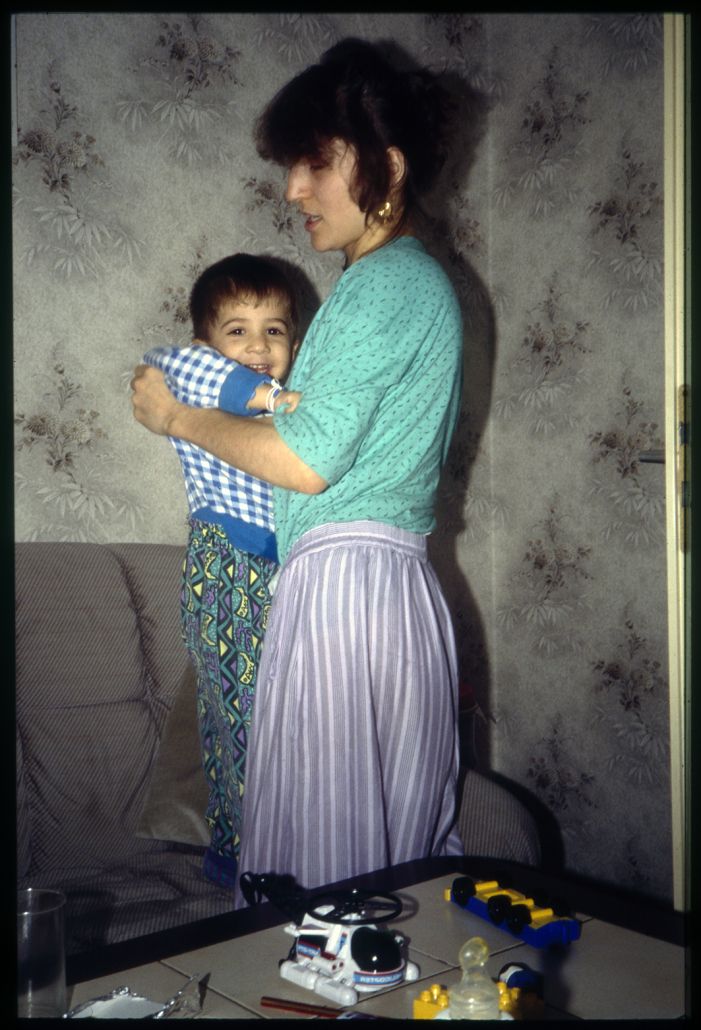 Dressing. Undressing. Mornings. Pulling a sweater over his head. Getting an arm into a sleeve. Wedging the other arm into the pullover. Then, even though it always slips out, pulling it into the sleeve and grabbing the little hand. Then pulling the hand into the narrow sleeve opening.

Dressing. Undressing. Pulling. He pulls. She pulls, tugs, shoves. He twists, slips away from her hands, runs into her arms, he holds on tight, wants to be held, pushes himself away. Fists clench, hands grab each other, head touch. Everyday choreography. And knowing that it’s like this, that one grabs, struggles, surrounds, is mother and child.

The father watches and picks up the camera. For him, the view is an evening ceremony that shows him that he has a living son, and that his wife looks after him. He photographs a daily ritual between mother and child. That entanglement of intimacy and distance, of countless actions where bodies relate to each other, roles are tried out and re-established every day.

This private photograph opens up the view of a daily ritual in a familiar world. The actors stick to their roles, the temporal sequences are fixed – in this intimate world of daily routines, the observer peers in.

Pictures with a migration background

Oriental folklore: Mary with the Baby Jesus before bedtime. The open expression, the boy’s smile towards the photographer who could be his proud, happy father. The mother: in close contact with the child, immersed in unimaginable, Oriental feelings of motherhood, taking full pleasure in the moment, especially and including the moment of being photographed, taking part with closed eyes. This “being-inundated-by-emotions!” This picture is like a mother-child icon. This means one can export one’s feelings in this direction. Because we know that mother-child feelings and even father-child feelings in our culture are always best exported or “immigrated” to the Orient. For 2000 years for example, Mary and Baby Jesus from Palestine have been the real migration backgrounds for our real feelings. This photograph makes them visible, you could say, and thereby formulate a Theory of Understanding, a Theory of Understanding Oneself in Pictures. A Theory of Understanding-Oneself-In-Understanding-One’s-Foreignness-In-Photographs, a theory of unconscious separation and reintegration.
And in the context of this picture, you could also comment on the crisis of ethnographic representation, on the question of what we actually do when we really go into the field of ethnology and research the “real” social contours of image use in foreign cultures; what we really do when we create theories about how certain practices of image creation or image use (capturing them, giving them as presents, hanging/throwing them on/at the wall, throwing darts at them, ripping them up, burning, framing, painting over them or handing them down) promote or guide social relations, or at the least how they should promote or guide them in the eyes of the participants. And one could link an anthropology of feelings or cultural hermeneutics – a cultural hermeneutics of the photographic “fusion of horizons”* or irrevocable difference. And one could ask oneself how to deal productively with the Eurocentric claim that Western culture has became so reflexive, that it is able to address and photograph its own social and cultural conditionality, its own fundamental contingency.
Pictures are occasions for the migration of our thinking.

*This is a term coined by Hans-Georg Gadamer, a German philosopher of the continental tradition.