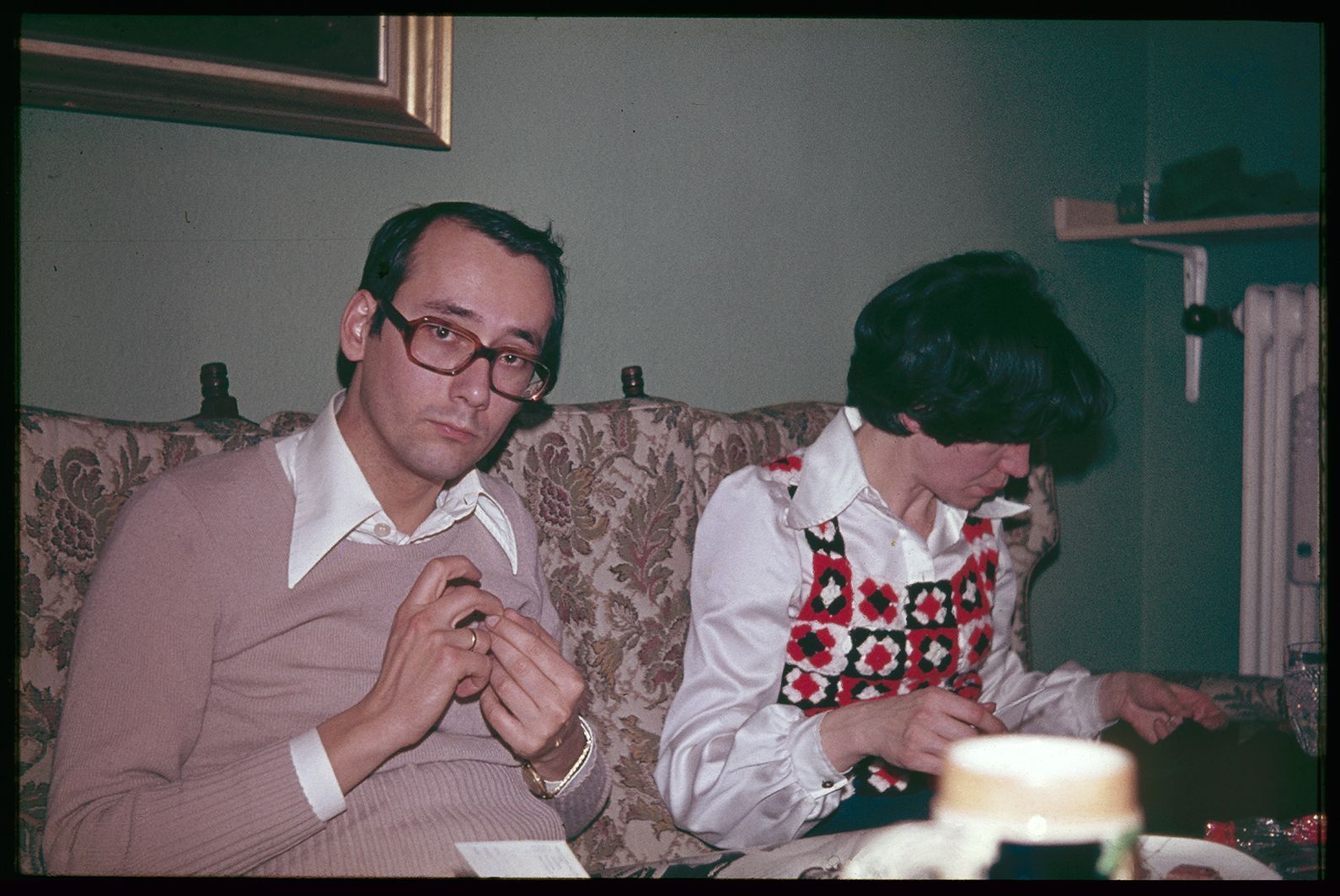 An age-old subject. The man has an eye for the camera and in front of him, a piece of paper with something on it that we can’t read is folded, and with his hands he gives a hand signal, and next to him his wife, who doesn’t have an eye for the camera, is busy with handiwork. And gender-sociologically, everything appears to be fine between the two of them – like figures from a card game, the pattern on the woman’s blouse, a two-colour deck, black and red, differently patterned diamonds – or even the theme of relationship patterns that repeat themselves in the background on the fabric covering the couch, you might think – all very ornamental… And your gaze returns to the man and his hands and the position of his fingers certainly belong to the syntax of an age-old sign language, you might think. Facial expressions and body language emphasize the intention of the “speaker” or they make them invisible. A signal that was not meant that way, perhaps. Communication has a pattern of use, you might think. And perhaps we don’t understand the relationship between the couple, between each other after all when we talk about this picture and look for codes on the inter-marital level; you might think and you might look closely again and again to find out what handiwork the woman is really doing there at the table or if she is just pretending and in reality, she’s just giving some kind of archaic signal too of what it is about. People are like that.

The projector ventilator hums. Herr N. holds the remote control in his hand and adjusts his glasses with his forefinger. Another slide appears in the darkened living room on the projection screen.

Us. That’s us, he thinks. Suddenly he sees himself and his wife as they used to be. How long ago is that? Me as a young man and R. next to me. When was that exactly? He gets up, goes into the kitchen and drinks something. When he comes back into the living room, he looks at his bygone face. His gaze meets the gaze of another I from his past. When was that, the question echoes emptily inside him.

A moment in his life with R. Not everything has been really important in his life. Not today, not then. Not everything has been fulfilled. He hasn’t wished for any great things. Before a holiday, that could be it, he thinks. In the ‘80s. Did we have a sofa like that in out flat? Life disappears into the incidental. Into before and after. Into scheduled slots. Before the holiday, yes that’s how it was, he thinks. R. was sewing something, changing something for the holiday. A blouse, a skirt? Her and me. Me. Her. Her skin went dark brown so quickly. Almost olive brown. Even when she stayed in the shade.

Mr N. presses the forwards button on the remote control. White light illuminates the living room. Mr N. checks the order of the slides and realises that there are some spaces. Shuffles around some of the slide frames. Her smell. The scent of her brown skin. For a second, he can taste it. He swallows, dry-mouthed. The slide projector hums. The slide frames slot into the plastic holder of the slide rail. A clicking, monotonous sound.